4 Reasons Why Southwest Airlines Would Excel At Behavioral Analysis 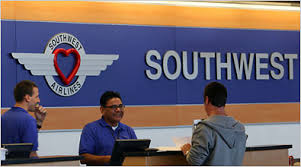 Last week a friend asked me what type of company my ideal client would be.  I was thrown off momentarily while I considered the question and realized that the best classes I’ve taught are to people who are open to learning and pre-disposed to being great at reading human behavior.  After a minute I gave him my answer – I would love to teach the employees at Southwest Airlines (LUV).  Here’s why:

1. Outgoing: Southwest’s gate and flight attendants, are outgoing.  They can start a conversation with anyone who gets near the gate to board a Southwest flight.  The people who are successful in using the skills taught in a behavioral analysis program are the ones who can have a non-intrusive conversation with a complete stranger.  Being able to read behavior as a method to preventing violence often means approaching the person who has attracted your attention and having a conversation without raising the potential attacker’s suspicions.  This is where you can confirm the observations and assessments that you have already made about the person.  Naturally outgoing people like those in sales, or, in Southwest’s case, every single person in a position that requires interaction with a customer, are great when it comes to this.

2. Learning: Southwest is committed to learning, developing, and empowering their employees. Southwest created the University For People (U4L), which is designed to improve their employees’ ability to succeed in their current jobs and prepare them for future positions.  Because behavioral analysis goes beyond only providing people with the skills needed to attain a higher degree of security, it also fits into their leadership development program by providing managers and decision makers with the information they need to make informed and accurate decisions.

3. Engaging: Southwest Airlines’ staff members are excellent at making people comfortable.  From the way their flight attendants interact with passengers as they board, to the way they provide the pre-flight seatbelt brief, to the often heard song that a flight attendant might sing as the plane is landing, they have the ability to minimize the stress of flying.  From a threat recognition point of view, this helps them reduce the pool of people who need further investigation for demonstrating anomalous behavior.  By separating the people who are uncomfortable about flying through engaging conversation from those uncomfortable because of their violent intentions, they can quickly focus their attention on specific people who stand out from the baseline after an unsuccessful attempt to establish rapport. This opportunity just doesn’t exist on other airlines.

4. Experienced: They see and interact with people from all around the world.  This means they already have an understanding of the universal elements of human behavior and nonverbal communication. A behavioral analysis class taught to them could focus more on how to identify the behavior of someone with violent intentions and how to communicate those observations to the law enforcement officers who work with the airline industry.

To see all of the behavioral analysis training available, take a look the training solutions offered by Active Analysis Consulting.

Next Post Opportunities For Veterans On The Stock Exchange