Breaking Down The Limbic System 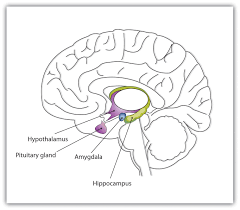 In the previous post “How The Brain Controls Behavior” we broke down what happens in the body once the Limbic Systems determines something to be a threat.  What we did not talk about what happens inside the limbic system to make this threat/no threat determination.  While the information is not vital to learning about behavior, understanding the process can provide additional insight to what is happening around us.

The process starts as information first enters our brain through the sensory systems (i.e. taste, touch, smell, sound, and sight,) and is usually brought to the Limbic System for an initial round of processing.  The sense of smell for instance is immediately brought to the limbic system, while inputs from the other senses could go to the pre-frontal cortex first.  The part of the brain responsible for transmitting this sensory information is the thalamus.  The thalamus is what makes the initial determination for the information coming in and decides to either pass it on to the Limbic System, as it may be a threat, or that the input from the senses is not a threat and passes it on to the pre-frontal cortex for addition analysis[i].

Thalamus = Transmitting Information From the Senses

When the thalamus decides that the information needs to go to the Limbic System, the first stop is the amygdala, which is responsible for analyzing the information coming in and deciding if any of it needs our sustained attention.  This is how we orient onto specific threats.  When we here gunfire, smell smoke, or touch a hot stove, our amygdala makes the decision to stay still (freeze,) run away (flight,) or prepare to shoot back (fight.)  This is where the emotion of fear originates, and “freeze”, “flight”, or “fight” is how the body is going to respond to that fear[ii].  This analysis occurs automatically and only requires a search of the minimum amount information in order to not waste time before triggering a life-saving response[iii].

Our eyes are attracted to movement, so despite the conversation we are having, we naturally look at the bird that just flew by instead of continuing to look at the person we are talking with.  Once our amygdala recognizes that is a harmless dove, and not a condor swooping in for a meal, we return our attention back to the person we are talking to because that bird is not a threat[1].  The amygdala’s response to certain information can be learned over time as well, for instance if a person continually associates a specific noise (gun shots or explosions) with unpleasant experiences (death or combat), they will respond to the noise with a fear (fight or flight) response even if the associated experience is no longer present. While we have talked about the amygdala being associated mainly with fear, it is also involved with positive emotional responses, and will seek out places and situations that are beneficial – such as places with food, water, and sex[iv].  The amygdala’s response to something being beneficial or negative plays a major role in understanding the Proxemic Pull and Push, as the amygdala will determine if it is beneficial to approach a person or location, or if it is better to distance itself from that threat.

Amygdala = Determines our attention, focuses on threats, and responds to emotions

Our amygdala is not acting alone in making this determination.  Before it categorizes something as a threat that requires a freeze, flight, or fight response, it will compare that information with what is stored in the hippocampus[v].  In short, the hippocampus is what coordinates the storage of our long-term memory[vi], and, as a great deal of information enters our limbic system, the hippocampus will help filter out and remove distracting information from the process by prioritizing information based off of those experiences we have had (i.e. our File Folders.)  Things that we have seen or learned in the past that taught us what a threat is will immediately take the priority of our attention.  For Marines who have handled weapons very regularly, they recognize a gun as a threat, while a small child who has not yet learned what a gun can do will look at a person holding a gun as a non-threat or with curiosity.  This is why there is such a high importance on training Marines to understand what threats look like when the enemy is not overtly holding an AK-47 (Assault Rifle) or an RPG (Rocket Propelled Grenade.)  If we can implant the lessons of what threats look like regarding body language, we can respond to those people much more quickly and become smarter warriors.

The functions of the hippocampus and how it relates to our survival makes developing this part of our brain such an important element of training, so that Marines can identify threats more quickly in combat.  What science has found to be the most effective way to implant lessons learned into the hippocampus is to engage another element of the Limbic System, the hypothalamus.  The hypothalamus is where chemical responses to emotions originate.  When you recall the most memorable moments and experiences of your life, whether it was your wedding day, the day your child was born, the day you scored the final point to win the championship game, the first time you were shot at in combat, or the day that your best friend was killed by the enemy, you can recall them in such vivid detail because you were also experiencing very strong emotions at that moment as well.  Whenever a chemical emotional response is generated by your hypothalamus, your hippocampus recognizes that experience as being very significant and makes that memory easily retrievable.  There is a concept that some teachers use to make their points more memorable, and that is by prompting the emotion and memory link.  If they tell a joke, tell a story that goes into great detail, or create an environment that provokes an emotional response, the student is more likely to recall that information in stressful situations, such as combat, because there is an emotion that is tied to that memory.  The hippocampus is going to be more likely to bring that file folder into the equation.

Hypothalamus = Release of hormones in responses to emotions

This entire process happens at such a rapid rate that you are not consciously engaged in this event, but are simply waiting for the judgment to be released by your amygdala of whether the object is a threat or not.  Once your amygdala releases the command to prepare for a threat, the command and the accompanying freeze, flight, or fight response is actually carried about by the body’s nervous systems that we talked about earlier in the week.  The first step comes from the hypothalamus, which controls the endocrine system in your body, and will command the release of chemicals to prepare your body for freeze, flight, or fight.

Do you need to know how all of these parts work together to know how to read body language?  Absolutely not, but understanding that this process happens is what allows us to focus our observations on the uncontrollable portions of behavior and ensure that our observations are reliable, accurate and give you the time needed to keep you alive in the face of the enemy.

[1] The Limbic System and the amygdala are looking for more than just threats when it relates to our survival.  The other two categories of objects that will sustain our attention are things that we can eat (food,) as that is required for survival, and, in order to ensure the survival of our species, we also look for things that we can reproduce with.  This is why men will naturally look at the good-looking girl walking past in a short skirt.

November 3, 2011 Is Predictive Profiling Legal? Read More
September 30, 2011 Understanding The Limbic System Is Like Telling Time Read More
December 6, 2011 Why We Do This Read More