November 6, 2012 in Applying The Observations 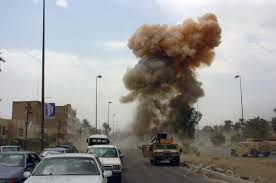 Why did no one tell me about this? Who had this information and why didn’t my Marines and I get it? This could have saved some of my friends. These are some of the things that were going through my head when I first received my Combat Profiling training, and that broken record still plays in my head today.

Too often Marines have a missing or corrupt file folder on the manufacturing and employment of IEDs.  It surrounds the IED with a cloak of secrecy. If we can demystify the IED we can open our eyes to the clues around us.  This post is going to give you one of the many tools to analyze the threats in your area. It costs nothing and weights nothing, but it can make us more efficient on the battlefield.

I recall a conversation during one of my tours in Iraq when I was seeking knowledge about one of the biggest threats in our AO (Area of Operations.) My Marines were well versed in the basic structure of the IEDs, having dealt with more than a few, but we wanted some more in depth knowledge of how they were actually manufactured. The person that we sought out definitely rated the title of subject matter expert, seeing as his job was to deal with IEDs on a daily basis. We asked the explosives tech questions that ranged from how they were initiated to how the explosives were actually made themselves.

To make a long story short, I started getting into subjects that where apparently above my classification.  Really? Apparently I have enough classification to step on, or drive over said IED’s, but not enough to learn how they’re made. I always wonder how many IED components my Marines and I walked by and did not notice because we didn’t have a file folder to go off of.

We will use a vehicle borne IED (VBIED) for purposes of breaking it down into its lesser components. There is a significant amount of planning, personnel, logistics, locations, and targets involved in the manufacture and employment of a VBIED. All we have to do is disrupt this sequence at any time in the chain of events and we stop the whole attack dead in its tracks. I like to use a technique that I call “exploding.” Look at the following diagram.

This is an example of an exploded diagram of an automatic rifle. An exploded diagram breaks something down to its component parts so we can see what goes into the weapon.  Why can’t we do this for our problems in country? Whether it is small arms attacks, sniper attacks, SVBIED, VBIED or just your vanilla-flavored victim operated IED there are a lot of pre-event indicators involved. By breaking it down in this fashion we can see all of the pieces of the puzzle, and instead of trying to find a prepared VBIED, all we need is a little bit of string to pull on and we can unravel the whole thing.

This is just an application of reverse engineering using inductive logic. Let’s take a look at the spider web of SUPPLIES, specifically the EXPLOSIVES branch of the diagram below. Our options are commercial grade explosives and homemade explosives. The latest statistic is that about 70% of IEDs in Afghanistan are homemade explosives. Think of all the things you need to make HME: glassware, chemicals, heaters, ice, and more. My find might not be the smoking gun bag of urea nitrate, but what about a pair of chemically rated gloves? It might be a pair of gloves you find under the backseat of a car or stuffed under garbage, but you have to be naturally curious and ask, what do you need these for? Could it be for some other innocuous task, yes, but what else could it be for? Think of the vehicle used for the attack. If I wanted to utilize the space in the car to the fullest I might gut the inside seats. Going back to finding things, I might not find the gutted vehicle, but what if I walked into a garage of a house and found the chairs and upholstery of a car sans the vehicle? If you can “explode” your problem and demystify it, you can start pulling on that string and unravel the whole plot before it happens.

The below is a diagram I created for the manufacture and employment of a VBIED.

For security purposes I did not complete this diagram. I am not being hypocritical – this isn’t a conversation between two guys in country; it’s an article on an open forum on the Internet. The last thing I would want is for the wrong information to grow legs and get into the wrong hands. Having said that, armed with my grade school level of education in VBIED making, I finished this diagram with four degrees of separation and ended up with over one hundred different bubbles. Each of these bubbles represents a component that we could be looking for in order to prevent the VBIED from being built in the first place.  You are only capped by your imagination and knowledge. With all of the pre-event indicators identified on paper we have successfully demystified the VBIED.  By holding it in your hand and looking at all of the pieces, it takes a lot of mystery out of it. You could take this matrix and hand it to any element going outside the wire and tell them to be on the lookout for the things in the bubbles. Instead of when I was in country and the BOLO would be “Hey Bro, watch out for a blue jingo truck, it’s supposed to be a VBIED.” By identifying all of these different pre-event indicators I can pull on the string and begin to unravel the attack before the bomb is even built.

We are always telling our young enlisted and officers to “turn the map around,” and I think this is a useful example of doing just that. When we don’t understand enough about a problem we are dealing with it can become amorphous, but by using the simple technique I just explained we can get ahead of the problem before it is a problem When I have the ability to hold my problem in my hand and stare it in the face, my options suddenly become much clearer. Some of you sitting there reading this are probably doing exactly what I was doing when first I was exposed to this information. I was thinking, Damn, I could have used this a few deployments ago. Better late than never.

Next Post Natural Lines of Drift In An Online Environment